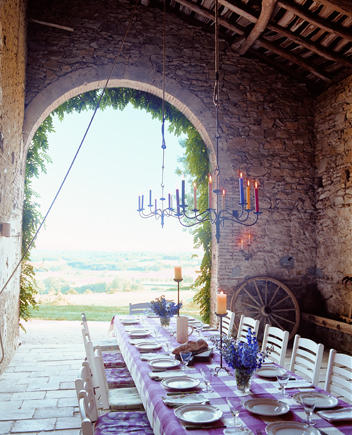 Day 3 in Provence. We had a splendid cooking class at a beautiful local restaurant, the most incredible food which we ate in the garden courtyard under the spreading plane trees. Cream of asparagus amuse bouche, spring garden salad with fava bean and tomato vinagrette, spring lamb with potato boulangere and jus, strawberries with pepper and sorrell pesto and fresh strawberry gelato,-incredible -and a deconstructed cheesecake and elderflower gelato to top it all off. Champagne, wine and stickies from the village we were sitting in and wandered home through the vines in the late afternoon sun. Guests all now lazing by the pool and the drippy cheese is just getting to room temp for a light supper later on......

Posted by Nikki Maxwell's Picnics in Provence at 8:50 AM No comments:

So far it's been quite a trip! 62 hours after leaving home in Melbourne I still haven't arrived on French soil. Our flight from Melbourne and Singapore had to divert unexpectedly to Dubai due to a medical emergency. A poor lass had appendicitus and had to be rushed to hospital. While we were waiting for the medical crew to board we heard that Heathrow airport had closed due to volcanic ash and therefore the flight would be delayed in Dubai by 14 hours - which actually turned out to be 26.
I have to say Qantas was great and provided 400 passengers with hotel rooms however the thought of sitting in a hotel room in broad daylight for 14 hours didn't fill a few of us with 2 much glee so we headed into the city to see the sights.
We took a trip on a local dhow boat along Dubai Creek, popped into the spice and gold souks and then passed the tallest building in the world, the top part lost throught the desert haze en route to Jumeirah Beach.
This beach resort area is what makes Dubai so popular as a winter sun spot, it's bright white sand, pristine beaches, glorious hotels and glinting swimming pools were positively begging to be enjoyed for a couple of days. Our flight beckoned however and after another 6 hours at Dubai airport, another 7 hour flight, a missed connection, a 7 hour layover at Heathrow, I am now finally about to board my final leg to France.
Posted by Nikki Maxwell's Picnics in Provence at 5:33 AM 1 comment:

Well finally heading off to France, this trip has been quite a while coming. I am however having a slight wobble at this particular moment in time, sitting at Melbourne airport wondering about the incentive to pursue a busines, albeit a passion which takes me 16000 kilometres away from my gorgeous family!

So endeth the pity party................First stop is 4 days in a sumptous house owned by the renowned British but US based interior designer Kathryn Ireland. Kathryn and I are hosting out first trip based from her house near Montauban in SW France in September. The tour promises to be amazing with a focus not only on food and wine of course but also on interior design. There is so much to do in that delightful region of France, far from the madding crowd and I am going there to make final preparations for our September week - meeting providores, wine makers, artists, antique merchants, chefs, decorators and a whole host of other wonderful and colourful characters.
Bear with me in this blog - it's a first for me! Internet access may be limited for the next few days but I'll report back from La Belle France as soon as she lets me.

Posted by Nikki Maxwell's Picnics in Provence at 9:20 PM No comments:

Just over 1 week to go until we meet our lovely guests at the station
in Orange.
Posted by Nikki Maxwell's Picnics in Provence at 10:04 PM No comments:

Nikki Maxwell's Picnics in Provence
Provence and Tarn et Garonne, France
'Picnics' was set up in 2007 after I was fortunate enough to spend time living in France,in a little known beautiful part of Provence, unspoilt France off the beaten track. Hailing from Scotland and living in Melbourne, Australia I am thrilled to personally accompany each French trip, along with my lovely co-host Kirsten and charmingly wonderful private chef.